Posted in Articles of note

When bidding on a house…

Bidding on a house?

An insightful story from the Wall Street Journal. 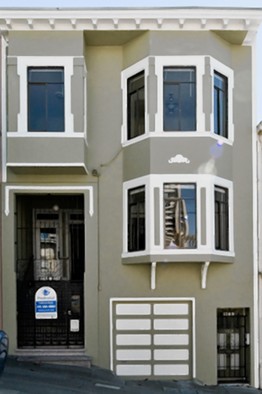 Won Over: Karen Loane’s bid got her this San Francisco multiunit.

One might assume that sellers simply choose the highest bid when at least two competing offers are received. But there are many other ways to come out on top when a competition ensues.

Of the more than 10,000 competitive offers examined by national real-estate brokerage Redfin, 44% of winning offers were all cash, making that strategy one of the most successful ways to come out ahead. In addition, 42% of winning offers noted that the buyers had conducted an inspection before submitting their offer. In many cases, accepted offers can be withdrawn if an inspection reveals problems with the house, so preinspections are a way of demonstrating buyers’ commitment to the sale. And 40% of winning offers waived the financing contingency for the purchase. Redfin, which covers 22 metro areas, examined offers that its agents wrote in 2013.

Many of these strategies aren’t new, but rise and fall in popularity based on market trends and region.

“Usually sellers go with the highest offer. But in the past year or so [as the market tightened] they really are looking at the whole deal,” says Ginger Shukrun, associate broker with Town Residential in New York City.

All-cash offers are common in San Francisco and Los Angeles, and cover letters are prominent in Westchester County, N.Y., according to the data. 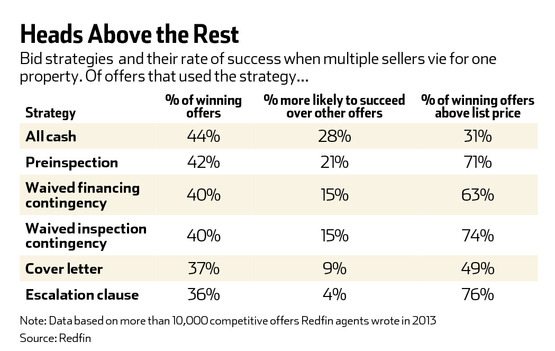 Aaron Drucker, a Redfin agent based in Westchester, includes a cover letter with offers about 95% of the time. “We wanted to find a competitive edge and differentiate ourselves from the competition,” he says.

His cover letters are usually one to two pages and include the terms of the deal—closing date, the deposit, the down payment—as well the names, contact information and pictures of the agent, lender and inspector. Mr. Drucker also adds a photo of the buyer and a quick biography written by his client, so “the sellers are able to visualize who is buying their house,” he says.

Seven months ago, Mr. Drucker represented a family from Chicago who wrote a personal letter explaining how they saw themselves living in the house. Though the family didn’t present the highest offer, they ended up winning the property for just below the list price of $749,000.

Three months ago, Karen Loane, a 38-year-old former partner in a sales and marketing firm, wanted to buy a multi-unit home in San Francisco listed for $1.4 million. Her agent, Davis Pemstein of Redfin, suggested conducting a preinspection to help assure the sellers that Ms. Loane wouldn’t back out of the deal.

Initially, the sellers chose another bid, but those buyers conducted an inspection and demanded the purchase price be reduced. So the sellers ended up going with Ms. Loane’s offer. The property closed for roughly $1.6 million.

“That was my strategy going into this,” Ms. Loane says. “Be nice, show up, write a nice letter, be clean on your offer and hope someone would want a stress-free closing.”

Places to go, people to see